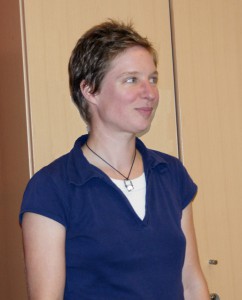 How to solve the schizophrenia problem

Thank you so much, hello, will you please stand up not for me, but for yourselves? Stand up and say hello to your neighbor. OK, now thank you very much and sit down, good idea. Now we go on.

Good morning, I was very much impressed by the last speech of Irene. I was very impressed because she said quite rightly: “Don’t give a diagnosis” and that means you do not have, you should not accept a diagnosis. And this is what I am talking about when I talk about “How to solve the schizophrenia problem”. I would also like to thank and congratulate those who organized this congress in times of crisis. This crisis makes people very creative. It has something positive as well. It is great to have the discussion about the emancipation of the Hearing voices movement in this classical culture country, Greece. This fits with the atmosphere where we would like to emancipate hearing voices. END_OF_DOCUMENT_TOKEN_TO_BE_REPLACED

The voice inside: A practical guide to coping with hearing voices by Paul Baker.

How work on the hearing voices experience has developed.

How did it start?

The first UK Hearing Voices Group was formed in 1988. It began as a small planning group originating in Manchester, inspired by the pioneering work of Professor Marius Romme, a psychiatrist from Maastricht in the Netherlands, and the Dutch self help group Foundation Resonance which was established through this work. Members of the UK group have visited Maastricht many times and attended conferences organised by the Foundation and in return have hosted visits by the Dutch workers. In 1989 the Manchester group organised a speaking tour in the North of England for Marius Romme, Sandra Escher (science journalist) and Anse Streefland (a non-patient voice hearer and Chair of Resonance). The meetings were very well attended by voice hearers, their relatives, and interested professionals. This has become a regular annual visit. END_OF_DOCUMENT_TOKEN_TO_BE_REPLACED

There is the signifying chain, reduced to its minimal features, which yields, as a result or as a leftover, the voice.

The subject is always only represented by a signifier for another signifier, as the famous dictum goes. In itself it is without foundation and without a substance; it is a lack, an empty space necessarily implied by the nature of the signifier—such was for Lacan, as it is well known, the nature of the subject that can be assigned to structure. So the voice seems to endow this empty and negative entity with a counterpart, its “missing half,” so to speak, a “supplement” that would enable this negative being to acquire some hold in positivity, a “substance,” a relationship to presence