To hear oneself speak is maybe the minimal definition of consciousness.

The designation “Hearing Voices Café” actually applies to every well-patronized coffee shop. At the same time, the phrase “hearing voices” is also associated with the phenomenon of hearing inner voices. Drawing on the ambiguity of the term, the Spanish artist Dora García is installing a gathering place for people who hear voices, hosted by the Traumzeit Café in Hamburg.

The point of departure for this work is the artist’s interest in the voice-hearers’ movement, which has its roots in the anti-psychiatry groups of the 1970s and conceives of itself more as a civil rights movement than as a form of therapeutic self-help. The first joint activities came about in Holland in 1987 with the mission of challenging the medical model of mental illness, and from there spread rapidly to other countries. What is presumably the most active branch of the movement has been in existence since 1988 in the English Hearing Voices Network. In 1997, the national associations moreover joined to form Intervoice, a group of voice-hearers and otherwise involved persons who organize the annual “World Hearing Voices Congress” in a different country every year.
Voice-hearing is not only a widespread phenomenon, but also a cultural-historically significant one. From Socrates to Mother Teresa, John of the Cross to the American avant-garde writer Hannah Weiner, famous philosophers, believers and poets have regarded voice hearing as a rare talent and a special gift. Other artists have had less positive experiences with this phenomenon, but it nevertheless strongly influenced their work: Sarah Kane, Robert Walser, Virginia Woolf or Philip K. Dick, to name just a few examples.

García’s Hearing Voices Café project revolves primarily around exchange, research and destigmatization. Structurally it is composed of various offers including detailed information material, a regularly updated newspaper and an audio work. There will also be a number of events on the history and current activities of psychiatry-related resistance and civil rights movements as well as on the relationships between language, mental idiosyncrasies, capitalism and art. Within the regular and bustling operation of the host establishment Traumzeit, The Hearing Voices Café will function as a public meeting place for voice-hearers and their friends, people interested in the phenomenon, and coincidental guests. To point out which guests hear voices and which ones don’t, is irrelevant for the community gathering there. 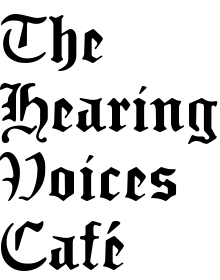